The concerns that surround the female body have been at the center of feminist discourses for decades. The internet gave us an opportunity to create the digital body, free of gender in a new borderless space, accompanied by rampant feelings that the age of fixed identities had ended.

The image of the female body as a metaphor – for whatever is desired – continues to inspire many feminist artists to experiment with the conceptualization of the female body and gender. But what was experienced as a new freedom of expression in the past has changed drastically within a more commercialized World Wide Web.

The internet has become a contested ground for different kinds of representation. What we are experiencing today is a major transformation of our understanding of the body, due to social change as well as technological influences. How do today’s different feminisms react to this digital transformation? What new images about bodies and gender are being created and what do they mean?

The thematic complex serves as a starting point for an international online event with artists, activists, and theorists from the FACES network and beyond.

The upcoming event in October is organized by FACES co-hosts Valie Djordjevic, Kathy Rae Huffman and Ushi Reiter on behalf of the Frauenkulturbüro NRW.

FACES is a loose community and mailing list that has successfully existed since 1997. Numerous renowned actors in the field of media art are part of this network.

S()fia Braga is a transdisciplinary artist based in Linz (AT). She develops her artistic research between Digital, Post-Digital practices and cyberstalking, focusing especially on the social impact of web interfaces and the subversion of centralized social media platforms, dealing with topic such as Interveillance and the reappropriation of the female body and sexuality through the use of new technologies. https://sofiabraga.com

Charlotte Eifler is an artist based in Leipzig/Berlin. She works at the crossroads of film, sound and technology. In her videos and multimedia installations she interrogates the politics of representation, abstraction, and computation. With a focus on feminist approaches and elements of science fiction she explores processes of image and history production. http://charlotteeifler.works/

Anna Bromley
An artist, author, curator, and radio host. Anna Bromley develops exhibitions, installations, performances, texts, radio conversations, and plays. Her interest is aimed at breaches and interruptions in representative ways of speaking and talking. She lectures internationally on topics that feature feminism, radio spaces, and the body. https://www.annabromley.com/

Her artwork has been included in exhibitions at the German Museum of Technology, Berlin; nGbK, Berlin; HKW, Berlin; City Museum, Ljubljana; Thealit, Bremen; Villa Rosenthal, Jena; Galerie Carmelo Gonzalez, Havana, among numerous other cultural spaces. Her texts appear in German and English publications and concern the topics art + work, activism, sound, and can often critique contemporary art and artistic practices. She lectures at the Kunsthochschule fuer Medien Koeln, Art and Media Studies, and she also lectures on Gender and Queer Studies at the Universitat zu Koeln.

Nancy Buchanan
A Los Angeles based artist, Nancy Buchanan uses various media to bring social realities into view, while grounded in the observation of a lived history. She has been involved in numerous artists’ groups including The Los Angeles Woman’s Building and Los Angeles Contemporary Exhibitions (LACE); she has also acted as curator for several exhibitions and projects. She is the recipient of four National Endowment for the Arts Individual Artist grants, a COLA grant, and a Rockefeller Fellowship in New Media. Her performance, video, drawing and sculpture has been seen internationally. https://nancybuchanan.net

Her work has been shown in exhibitions internationally, notably at MOMA, MOCA, the Centre Pompidou, Getty Research Institute, and was included in four of the Getty-sponsored Pacific Standard Time exhibitions. From 1988-2012, Nancy taught in the Film/School at CalArts, where she has been awarded Emeritus faculty status and is represented by the Charlie James Gallery, Los Angeles.

Daphne Dragona
An independent curator and writer, Daphne Dragona is based in Berlin. Her exhibitions have been hosted at the real or virtual premises of Onassis Stegi, LABoral, Aksioma, EMST, Akademie Schloss Solitude and other institutions. Through her work, she engages with artistic practices and methodologies that challenge contemporary forms of power. Among her topics of interest are the controversies of connectivity, the promises of the commons, the challenges of artistic subversion, the instrumentalization of play, the problematics of care and empathy, and, most recently, the potential of kin-making technologies in the time of climate crisis. http://daphnedragona.net

Dragona was part of the curatorial team of the Transmediale festival (Berlin) from 2015 until 2019. From 2001-2007 she was the general coordinator of medi@terra festival (Athens). Articles of hers can be found in publications like Springer, Sternberg Press, and Leonardo Electronic Almanac, as well as in art magazines and exhibition catalogues.

Seda Gürses is currently an Associate Professor in the Department of Multi-Actor Systems at TU Delft at the Faculty of Technology Policy and Management, an affiliate at the COSIC Group at the Department of Electrical Engineering (ESAT), KU Leuven, and a member of Constant VZW, a Brussels based feminist arts collective. Together with Miriyam Aouragh, Helen Pritchard and Femke Snelting, Seda recently founded The Institute for Technology in the Public Interest.
http://vous-etes-ici.net/

Her work focuses on privacy enhancing and protective optimization technologies (PETs and POTs), privacy engineering, as well as questions around software infrastructures, social justice and political economy as they intersect with computer science. Seda is also a member and supporter of Alternatif Bilisim Dernegi, an association based in Turkey working on digital rights. She regularly blogs and participates in online discussions surrounding issues of privacy.

Mikala Hydig Dal
An artist and curator based in Berlin, Cairo and The Hague, Mikala Hyldig Dal examines visual cultures through video and text-based interventions. She embeds critical theory in immersive digital environments. She intersects artistic practice with political activism. Her practice is concerned with the connections between image production and the destruction of images (iconoclasm), processes of visualization and invisibility, and the structures of power created by images. http://cargocollective.com/mikala-hyldig-dal

A graduate of the Berlin University of Arts, her work has been presented internationally, including at the Martin Gropius Bau and House of World Cultures, Berlin; Townhouse Gallery, Cairo; Museum of Contemporary Art, Los Angeles; Nikolaj Kunsthal, Copenhagen; Flux Factory, New York and Azad Gallery, Tehran. She is the editor of the anthology “Images of Transition,” on art and activism in the Arab Uprisings of 2011 and she is a founding member of the feminist artist collective MATERNAL FANTASIES.

Alla Mitrofanova
The founder of the Russian Cyberfeminist community, Alla Mitrofanova is a Russian art critic, media-philosopher, media art curator and eminent feminist scholar. Her work has emboldened cyberfeminism in Russia since the early 1990s. Her text, “Looking for ‘Information’, ‘Subject’ and ‘Body’ from the Metaphysics to the Present,” is published in the First Cyberfeminist International reader. Her text “Cyberfeminism, History, Practice, and Theory” (2010) is included in the collection “Feminism Art Theory: An Anthology 1968–2014” (2015). https://www.digitalicons.org

Alla has participated in artist talks and presentations at various international events, including Documenta and the Ars Electronic festival in Linz, Austria. She is a curator of the Philosophical Café, and for Gallery 21, St. Petersburg. She is the organizer of the translation seminar for Karen Barad’s book “Meeting the Universe Halfway: Quantum Physics and the Entanglement of Matter and Meaning.”

Lisa Rein
An artist researcher and designer based in Berlin, Lisa Rein graduated from Aalto University, Helsinki’s department of New Media, with a minor in Visual Culture, Curating and Contemporary Art in 2021. Their Master’s Thesis, “On the Sociocultural Implications of the Computational—Dirty Computers,” reveals the depth and analytical focus made more poignant by the Covid-19 pandemic. Their work ponders questions of digital media infrastructures, codes, language, and emancipatory practices. https://aaltodoc.aalto.fi

A participant in the Creative EU project Beyond Matter—Cultural Heritage on the Verge of Virtual Reality (2020-2023), they worked with the Tirana Art Lab, and were involved in the development of a virtual archive of artworks that have been or are currently present in Tirana’s public space. They currently teach at the University of Applied Science (HTW), Berlin, and they will assist at the Digitale Welten Festival for young people in Frankfurt, Germany.

DORFTV
is a Community TV organisation based in Linz
https://www.dorftv.at

Thanks to the financial support by 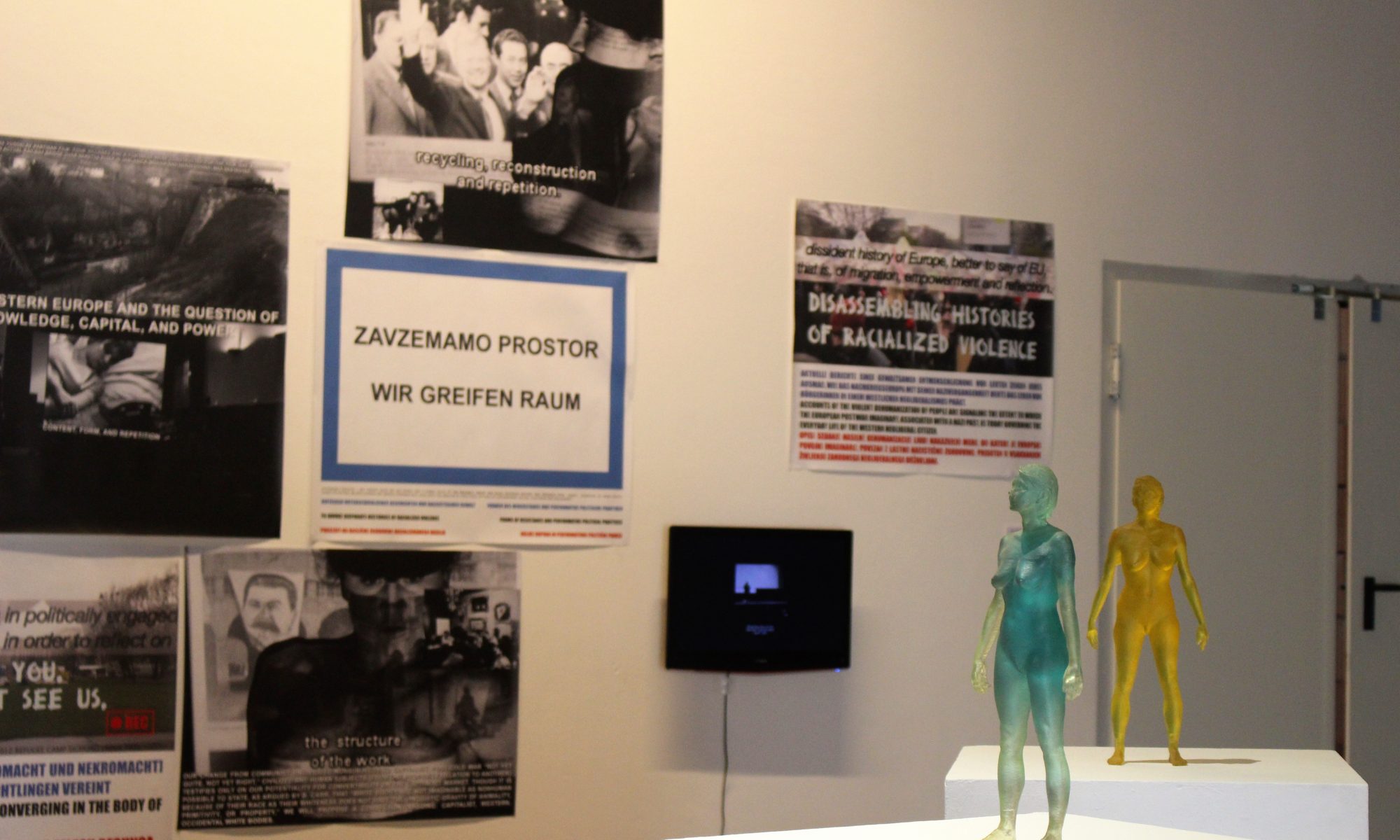 The email list and platform bring together and connect media artists, activists, digital researchers and cyber-entities identifying as women. In 2017 we celebrated FACES’ 20th anniversary from 13 to 15 October 2017 at Schaumbad, a self-organized collective with ateliers and an exhibition space, in Graz, Austria. We (approx. 50 of us in person) celebrated FACES with an exhibition, performances, screenings and a symposium: on art, gender and technology. The gathering in Graz was largely a self-organized event, made possible by Eva Ursprung, a member of Schaumbad and also one of the core members of FACES. Ursprung worked closely with another key figure and founder of FACES, Kathy Rae Huffman. Together they curated the exhibition and envisioned the whole event with support from three other key figures of FACES: Valie Djordjevic, Diana McCarty, and Ushi Reiter. END_OF_DOCUMENT_TOKEN_TO_BE_REPLACED

While we hope to be inclusive, we are working with limited resources, and we are doing our best to provide the best conditions possible.
END_OF_DOCUMENT_TOKEN_TO_BE_REPLACED